Unconfirmed Monolith  This monolith does not have proper sourcing and might be a forgery.
Please update this monolith if you have additional sources, links, or eyewitness accounts that could aid us in verifying this monolith. 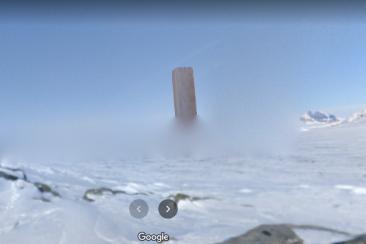 The structure of great proportions would be located on the Barry or San Martín islet of the group of Debenham islets, in the Motteta pass of the Fallières coast, in the Margarita Bay of the Antarctic peninsula.

The San Martín base is the first human settlement south of the Antarctic Circle.

Notes
We need a more credible source for this monolith. Currently we have a google 360 view on google maps, but the base of the monolith with the ground is obscured by a blurry area.
The "monolith" appears to actually be a glitch in the 360 image stitching, as the wooden pole behind the camera is missing part of its top and the wood grain and color appears to match that of the pole.
Dates & Classification
Date Spotted
2021-02-14
Date Vanished
2021-02-14
Classification
Unconfirmed Monolith usually reported directly or on social media
Multiple Monoliths
✖
Physical Qualities
Material
Wood
Construction
Solid
Number of Sides
Four Sides (Rectangular or Square)
Texture
Wood
Top Geometry
Flat
Height
10.00 meters
Markings
No Markings
Articles & Media
hombresdenegronetwork.blogspot.com
Google Maps