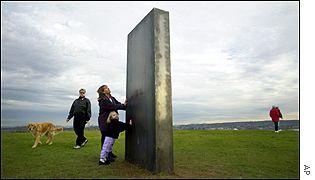 In Seattle a monolith was constructed in 2001 as a tribute to the classic "2001: A Space Odyssey Monolith" film. The monolith was moved a few times, ending up in Interbay, Seattle.

The Monolith was fabricated by Louie Raffloer at Seattle's Black Dog Forge. It was a hollow structure measuring 1 by 4 by 9 feet (0.30 m × 1.2 m × 2.7 m), the same proportions as the Monoliths of the "Space Odyssey" series.

Initially, the artists creating the Monolith had the idea that the public would never know where the Monolith came from or who constructed it. That changed after the Monolith was removed from the park and found on Duck Island. Artist Caleb Schaber came forward as a spokesperson for Monolith announcing a group of artists named "Some People" were responsible for the art.